The City of Prague aldermen’s committee approved the rules of the permanent committee of the Municipal Museum of Prague on 3 October 1881. In the spring of 1883, the museum opened its collections to the public in a small pavilion near the demolished Poříčí Gate. The present-day building, designed by the architect Antonín Balšánek, opened to the visitors in the autumn of 1900. Since that time, the Prague City Museum could have been regarded as a dignified seat to keep the tangible memory of the history of Prague.
Conservation Department Archaeological Collections
Museum’s First Director Today’s Museum Building Historica Pragensia I

§ 1. The purpose of the Prague City Museum is, through a collection of historical monuments relating to Prague and specifically monuments of art and crafts, to provide a picture of the education and tastes of Prague's inhabitants in times past.
§ 2. It is the role of the permanent museum committee to seek out, protect from destruction and misappropriation, acquire and exhibit monuments of the types mentioned in § 1. If monuments themselves cannot be acquired, gaps should be filled with casts and reproductions of all kinds.
§ 3. The following are to be used to achieve this objective: a) subsidies from the municipality of Prague, b) gifts and bequests of any kind, particularly for artistic monuments provided by friends of Prague Museum, c) the loan of artistic and historical monuments, the custody and exhibition of them in the museum's rooms through an understanding with the owners in each individual case, and finally also d) an admission charge.
§ 4. All collections of the city museum, unless they are only on loan, as well as the inventory shall be the property of the municipality of Prague. 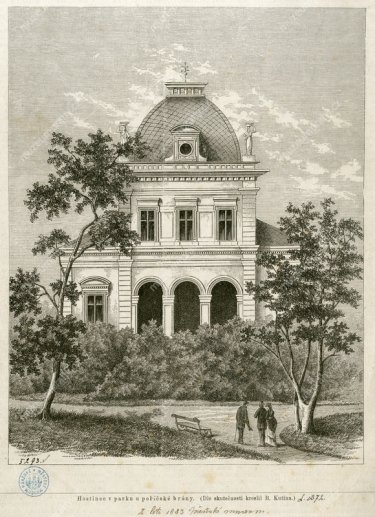 A newly built café pavilion in the park on the site of the recently demolished fortification walls near the Poříčí Gate in 1876. Drawn by B. Kutina for the Světozor magazine, wood engraving.

Throughout the first half of the following year the Committee's meetings were dominated by discussions on obtaining new items and were also marked by attempts to acquire further premises for the museum, primarily for exhibition purposes. A number of sites were under consideration: the Powder Tower, the Old Town Bridge Tower, the America Summerhouse and the Queen Anne Summerhouse, rooms on the ground floor of the Girls' High School on Vodičkova Street and the Saint Agnes Convent. A definite breakthrough occurred around the middle of 1882 when the museum acquired the existing café pavilion in the city orchards in Poříčí.

After the mid-1882, Břetislav Jelínek (born Josef Boleslav Otakar Jelínek) became the museum keeper. He was born on 16 March 1843 to the family of a Prague businessman and director of the Lochovice cotton mill. He abandoned the Prague Polytechnical Institute to study at the Faculty of Arts during the following three years, a special study programme, attending lectures on archaeology, art history, Old Bohemian law, and Slavic philology. When the family property was declared bankrupt in 1880, Břetislav Jelínek lost the financial support that enabled him pursue his avocations, especially archaeology. The museum keeper's position provided him with the basic existential certainty and enabled him focus on his interests as well. Jelínek headed the museum for thirty years (1883–1913) and significantly influenced the forming of its collection. During that period, the best quality museum collections were established and received a great care, both regarding conservation and registration. He also contributed to the positive response of the City of Prague exhibitions at the 1891, 1895, and 1908 world fairs. After the successful exhibition presented at the Ethnographic Exhibition in 1895, he was appointed the Director of the Municipal Museum of Prague. Břetislav Jelínek died on 22 May 1926 and was buried in the family tomb at Olšany Cemetery in Prague. 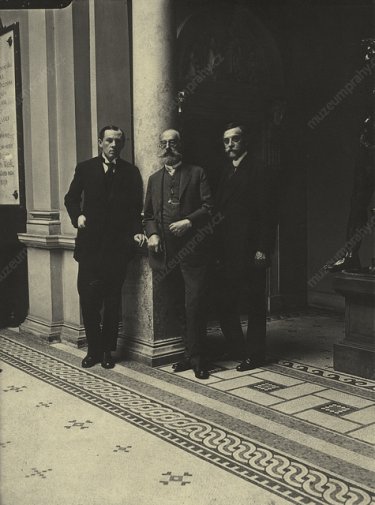 The museum's extension was discussed for many years; the earliest plans date from December 1889. After all kinds of difficulties, the city council agreed on assigning the architect Antonín Balšánek with the designs and addressed him in August 1895. At the end of 1895, the aldermen's committee approved Balšánek's designs and in the spring of 1896 the construction finally began. On 22 October 1898, a private opening of the new building took place which was followed by two years of intense installation with the assistance of the young art historian František Xaver Harlas, Jelínek's later successor. From mid-March to mid-May 1899, the building was temporarily opened to the Praguers with the posthumous exhibition of works by Luděk Marold. On 27 September 1900, the new building and its newly installed collections finally opened to the public. 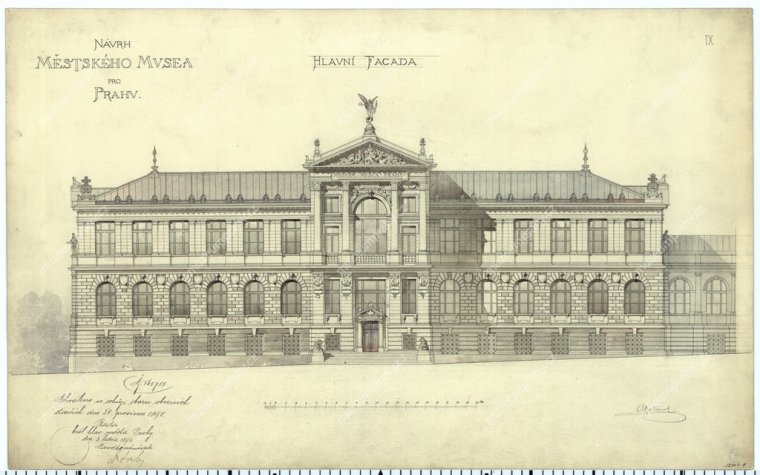 Designs for the Neo-Renaissance Municipal Museum, the present-day Prague City Museum's main building at Florenc. The designs were made by the architect Antonín Balšánek and approved by the aldermen's committee on 28 December 1895; view of the façade. The construction was carried out during 1896–1898, the collections were installed over the following two years.