The scapular (derived from Latin scapulae – shoulders) was initially a normal part of the monk's habit to protect the garment at work; generally speaking it was an apron. The scapular was a piece of cloth with an opening for the head suspended from the shoulders. Such a scapular is recorded in the Order of Saint Benedict (6th century).

In this form, the scapular has been worn by many religious orders and congregations to this day. Over time, however, it has received a symbolic function, reflecting the wearer's commitment. With the emerging 'third orders' of laymen or fraternities during the 13th century, it served as a visible symbol of allegiance to a specific religious order. For practical reasons, it became remarkably smaller to be worn directly on one's body.

The scapular of the Carmelite order is the most famous one. Originally a pilgrim lay community inspired by the Old Testament Prophet Elijah, the Carmelites originated in the Holy Land, at Mount Carmel, in the 12th century. After the originally successful campaigns of Christian crusaders, the influence of the latter slowly faded away and the community was forced to relocate to Europe. In compliance with their character, the Carmelites joined the Franciscan and Dominican mendicant orders. At that time, Prior General Simon Stock (1256–1265) received a scapular from the Virgin Mary. It was bound by a pledge of salvation if one wore the scapular when his hour arrived.

The scapular is consecrated; therefore, it is ranked among sacramentals. Its wearing should connect with the faith and true commitment of the wearer at all times. God's protection against all imaginable evil is not guaranteed by the scapular but rather by the divine power it symbolises. The Carmelite scapular has been used to this day. It is made of two rectangular pieces of cloth featuring Our Lady of Mount Carmel and the Most Sacred Heart of Jesus Christ. The pieces are joined by two bands of cloth to be worn over one's shoulders. 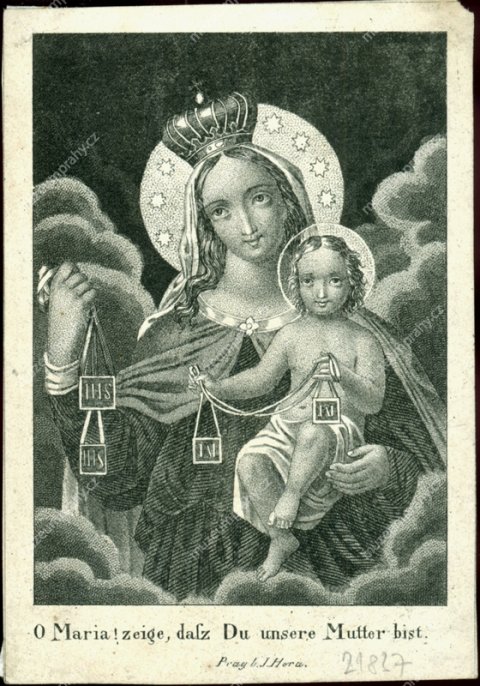 The faith of our ancestors was not always 'flawless'. Similarly, scapulars, crosses, holy cards, printed prayers, blessings, and other devotional objects were often regarded as rather magical objects and protecting amulets. People attributed miraculous power to them and treated them in this sense. Superstition displaced faith. Naturally, the church criticised it and banned multiple religious objects for being used as amulets, not because the images or texts were harmful.

This was the fate of the 'false scapulars' on display. However, neither the ban nor the criticism thwarted their popularity.

In a typical vernacular environment, these scapulars guaranteed supernatural protection of life, health, possessions, and other important life values. Most often, they combined or accumulated various types of small medals, seals, holy cards, printed prayers, blessings, and excerpts from the Bible. They further included consecrated objects such as parts of plants (catkins), frankincense, etc. A simple rule was common for gathering these objects – the more, the better. The assemblage was glued together and placed in a textile bag that was often embroidered. The bag was sewn up, as its opening was not contemplated. The scapular was worn on the neck but also placed on roof frames, cribs, beds, luggage, under the doorstep, in the cowshed, henhouse, ... simply wherever it was needed. The scapular's composition sought to guarantee a complete protection and help against evil affecting both the soul and body as well as against the disapproval of relatives, natural forces, and supernatural forms of evil. 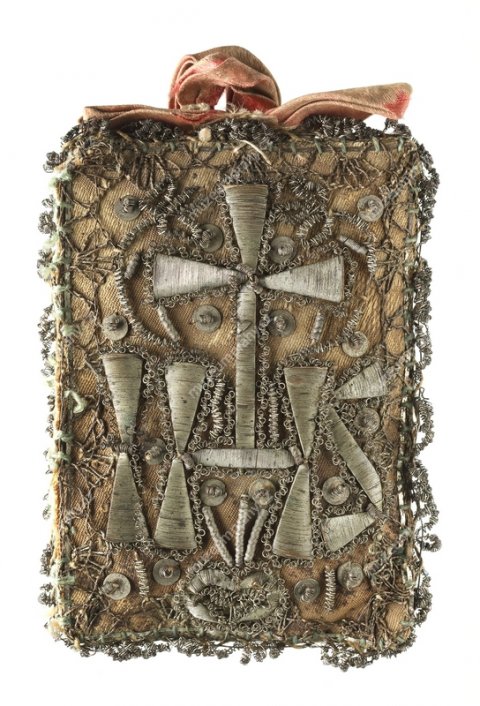 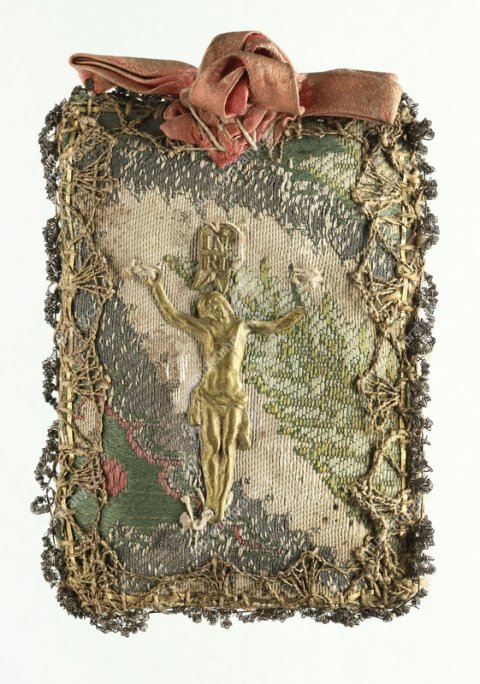 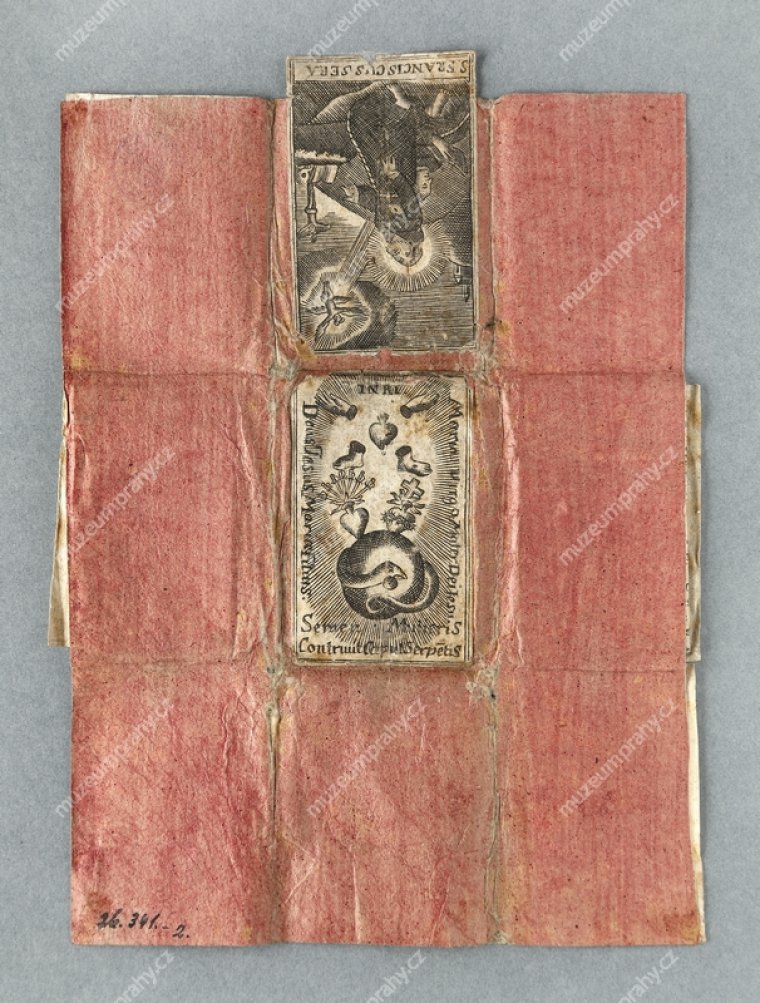 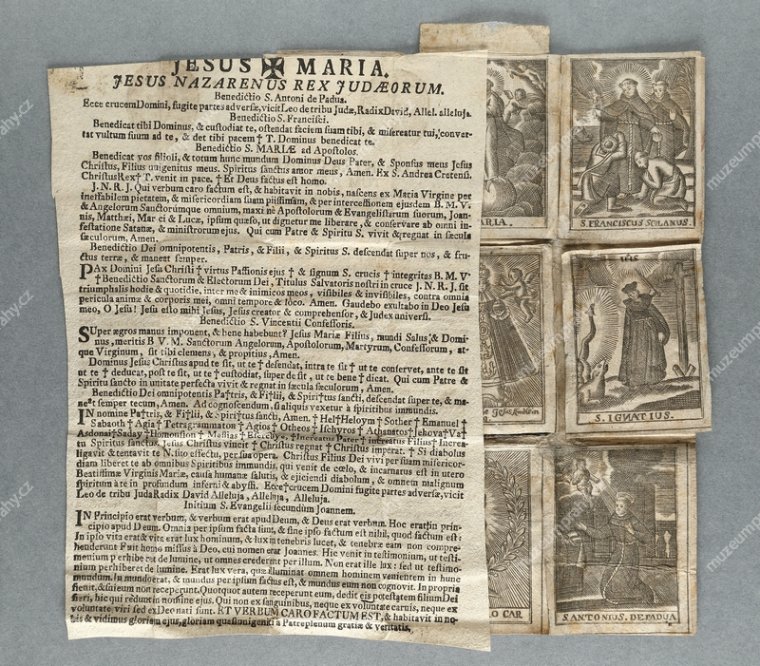 Latin printed texts are inserted below the image of Saint John of Nepomuk: the blessings of the saints and the beginning of the Gospel of John, a protective blessing against evil and an approving formula. 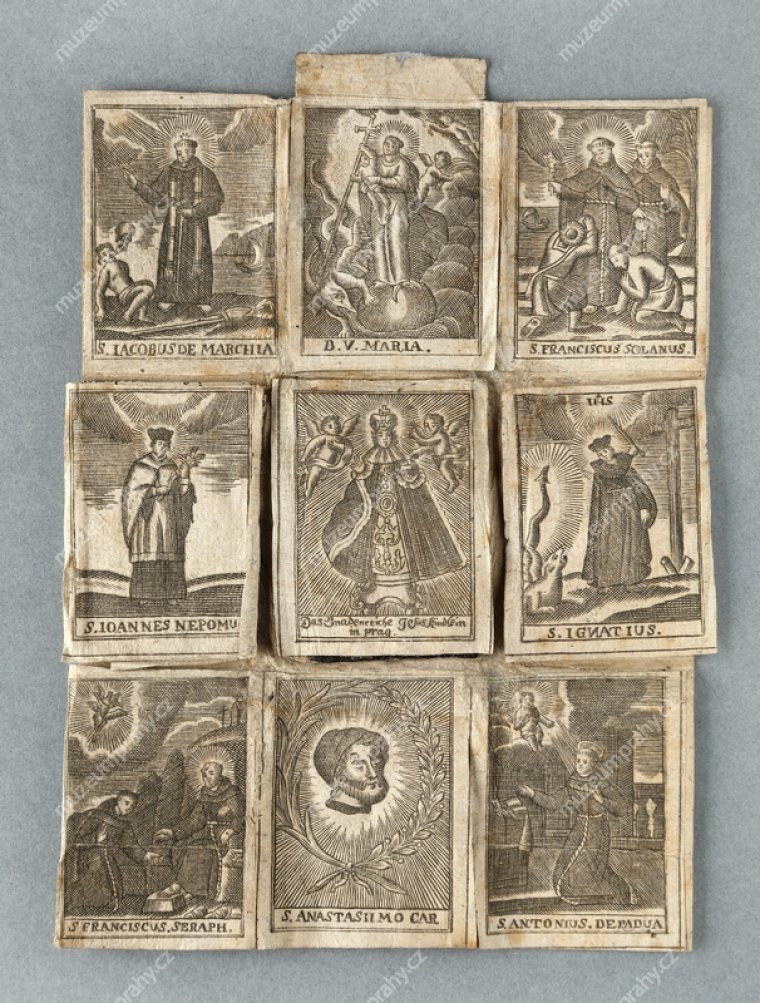 The reverse with a protective blessing against the attack of evil. The bottom part features the approval of the church, imprimatur, probably false – Fr. Bartolomeus Roca de Palermo Taurini, saw, approved.

An image of Saint Agatha, a martyr, and Saint Agatha's blessing (against the earthquake, fire, and foul weather), is under the image of the head of Saint Anastasius of Persia

A touched-upon label with the Magi and a versed Italian pledge to the Magi (against the tempest, fever, and sudden death) is glued under the Virgin's image. 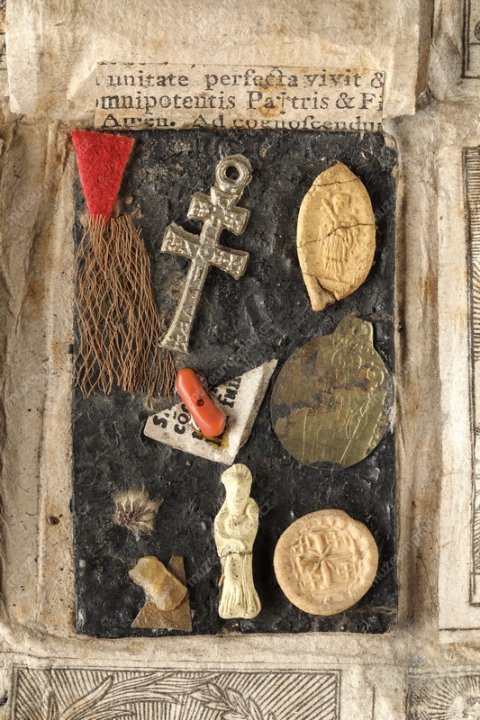 A notional heart of the scapular, a collection of sarcamentals and devotional objects in a box, probably glued with consecrated wax, is placed underneath the Infant Jesus of Prague image. 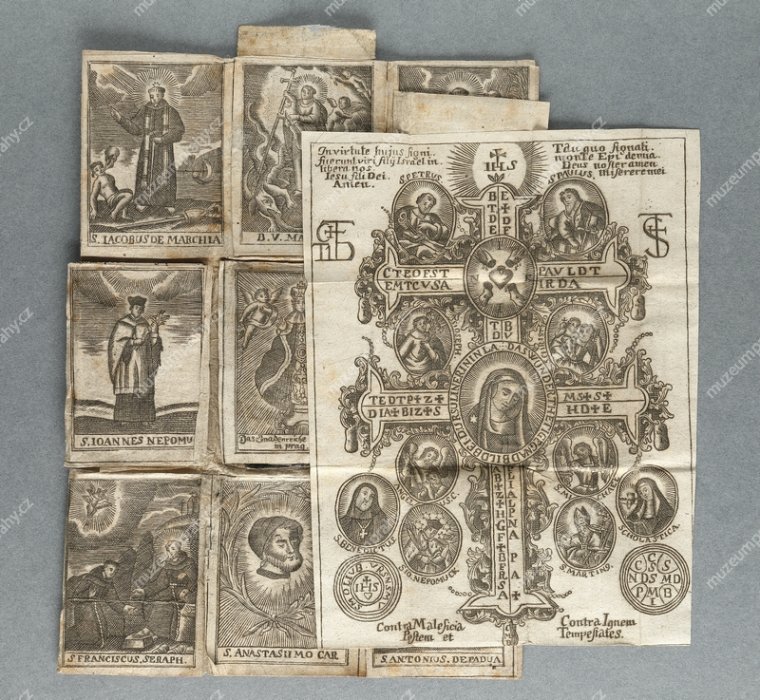 A home blessing in the form of the Cross of Caravaca is placed underneath the image of Saint Ignatius. The reliquary with part of Christ's cross has survived in Caravaca, Spain. The blessing further includes holy cards, Latin texts and abbreviated blessings against the plague, evil, and disasters. The abbreviations indicate first letters of the words or biblical texts.

Exorcist formula
Contra Maleficia – Contra Ignem. Pestem – et Tempestates
Against witchcraft – against the fire of the plague – and tempests

In the power of this Tau sign, which afflicted
the men, sons of Israel, with an epidemic.
Save us – our God. Amen
Jesus, Son of God – have mercy on me. 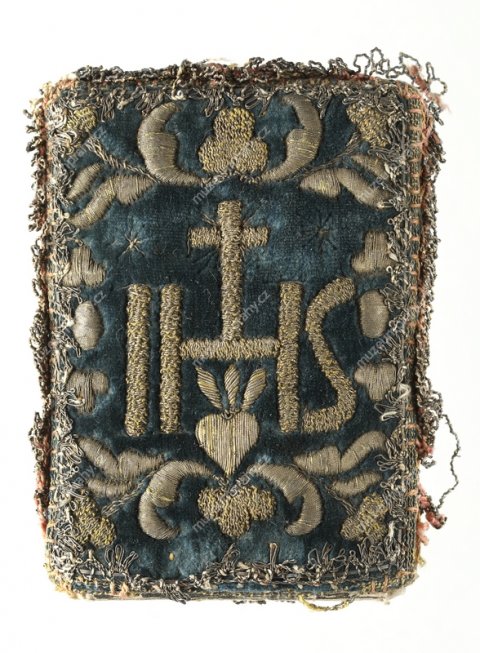 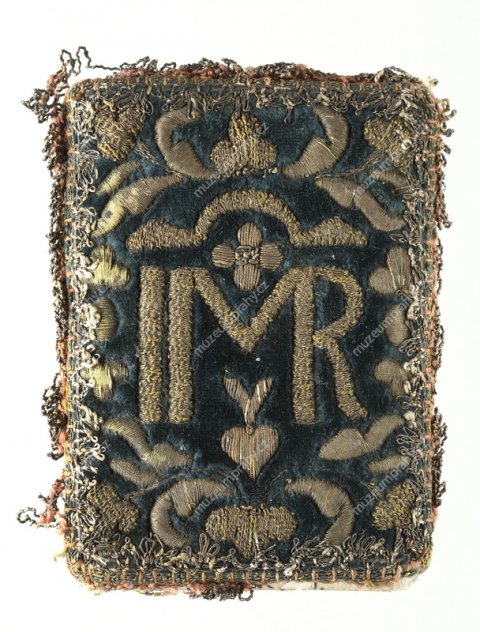 Folded glued print with the images of saints, Latin texts from the Bible and blessings. In the centre is a box with relics and devotional objects, the case is made of blue velvet with goldwork embroidery, initials of Jesus Christ and the Virgin Mary with hearts, Freising, 1740, size: case: 10 × 7 × 2 cm, print: 15.5 × 20 cm, MMP H 054 903. 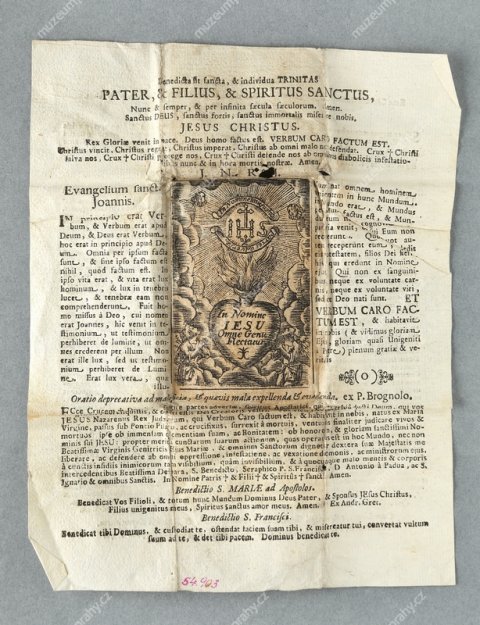 The blessing in the name of the Holy Trinity to protect against evil in the hour of death
The beginning of the Gospel According to Saint John, John 1:1–14
The prayer to avoid evil and witchcraft that repels it and leads out of it, by P. Brognol
The blessing of the Virgin to the apostles
The blessing of Saint Francis
The Most Sacred Heart of Jesus 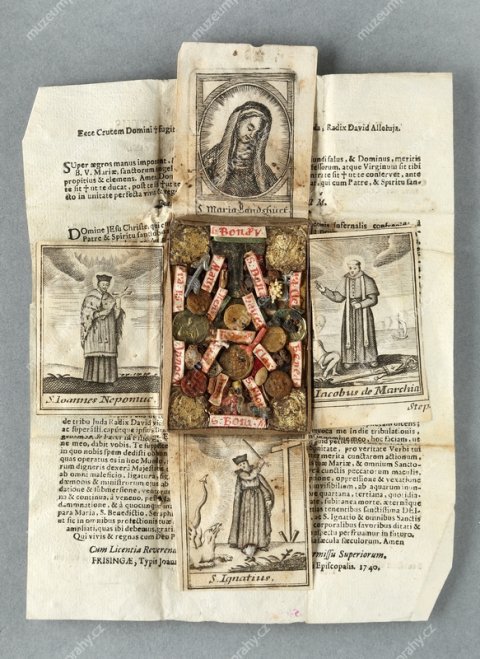 An oblong box is placed in the middle. It mainly contains relics of saints and small medals glued with wax – see the content of the box below. Instead of a lid, the box is covered with the following four images of saints.
Image of the Virgin with a tilted head (Landshut, grace image in the Ursuline Convent, 1680)
Saint John of Nepomuk – patron saint of bridges and water
Saint James of the March, Friar Minor, preacher – patron saint of soul salvation
Saint Ignatius – patron saint against the plague and fever