In 2019, the City of Prague Museum presented a collection of dance cards and fans from the second half of the 19th century as part of the Object of the Season series. You can now view the modified version of the exhibition on the museum’s website.

Subtle dance cards and ingenious fans give evidence of the unparalleled boom of balls, dance parties, and social life of Prague inhabitants during the second half of the 19thcentury. At the same time, they bear witness to the highly developed rules of contemporary etiquette.

The main dance season in Prague was related to the Shrovetide period, from the beginning of the year to Ash Wednesday. The second, less spectacular season took place outdoors from spring to autumn. The halls on Barvířský (Žofín) and Střelecký islands provided dancing opportunities while summer parties were organised at Stromovka and Štvanice; Měšťanská beseda was a key social centre. In addition to private balls and parties, various institutions organised dance parties, such as the faculties of the Prague University and burgher guards; beginning in the 1860s, the involvement of Prague clubs and organisations including charities in the organisation of balls gradually increased. Masquerade balls, referred to as merendy (merriments) or reduty were rather remarkable and were regularly organised by Umělecká beseda.

Similarly, šibřinky (masquerade parties) were organised by the Sokol movement. Furthermore, the Czech national balls (later Národní besedy) represented the phenomenon of the actively formed nation-oriented society. The multifarious character of balls and dance parties in Prague as well as the extent of originality, wit, and taste of their organisers are aptly reflected in dance cards which are abundant in the City of Prague Museum collection. Ball organisers commonly published dance cards during the 19th and 20th centuries. They came with ball tickets.

Dance cards were subtle booklets or diaries embellished with a printed date and place of the event, sometimes supplemented with verses by Czech poets. Dance cards were equipped with small metal hooks to fasten them onto a dress or handbag and an essential miniature pencil used by ladies and gentlemen to write the name of the dancer on the line of the particular dance. Dance cards came in different versions, from lapidary concertina books with an embossed envelope over more pompous notebooks resembling miniature velvet book bindings to sophisticated original artistic compositions combining paper, metal, textile, tassels, and feathers whose form many times referred to the ball organiser.

Similar to dance cards, fans were a decorative and practical accessory of ladies as well as a coquettish means of communication; fans came back into fashion before the mid19th century. Observing the historical trends, their folding paper sheets were decorated with painted or lithographic scenes; later , fans made of or decorated by feathers became popular as well as laced and embroidered tulle fans combined with pearly ribs and brise fans formed by a set of engraved ribs connected with a silk ribbon.

Several lithographdecorated examples form a special collection. Combining the fan and dance card functions, they were made to commemorate the Slavic balls in Prague in 1849 and in Vienna a year earlier. 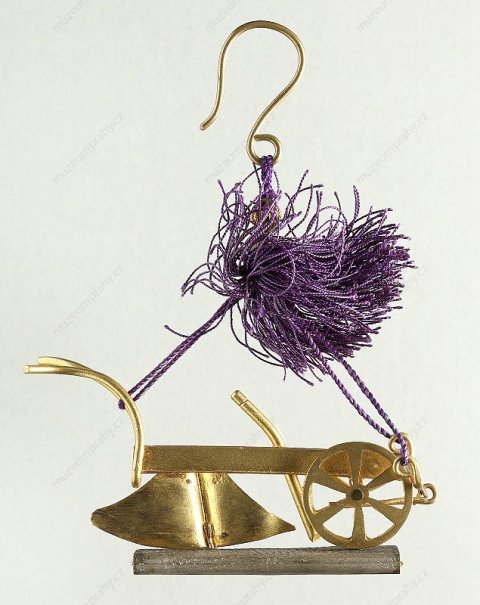 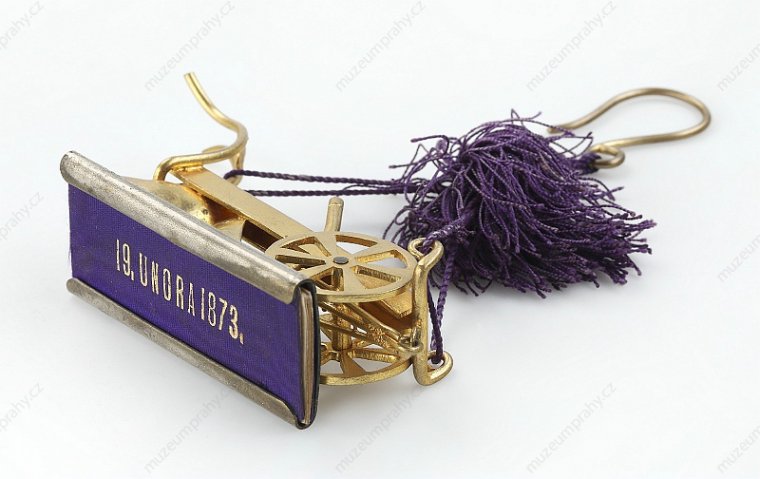 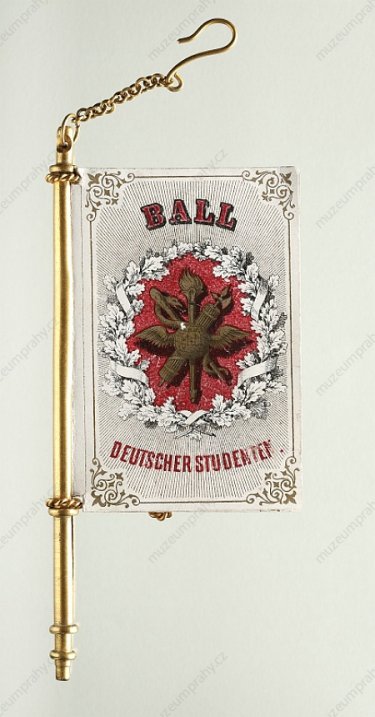 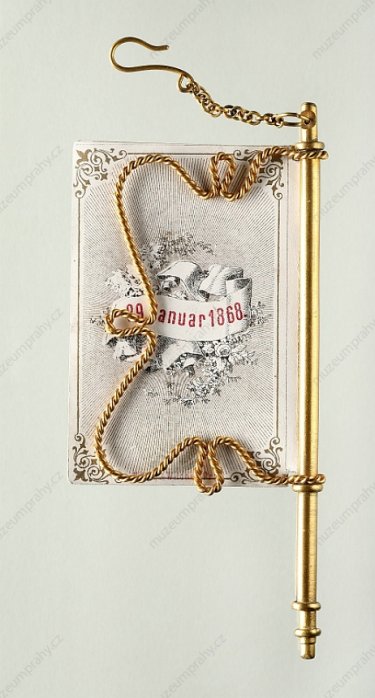 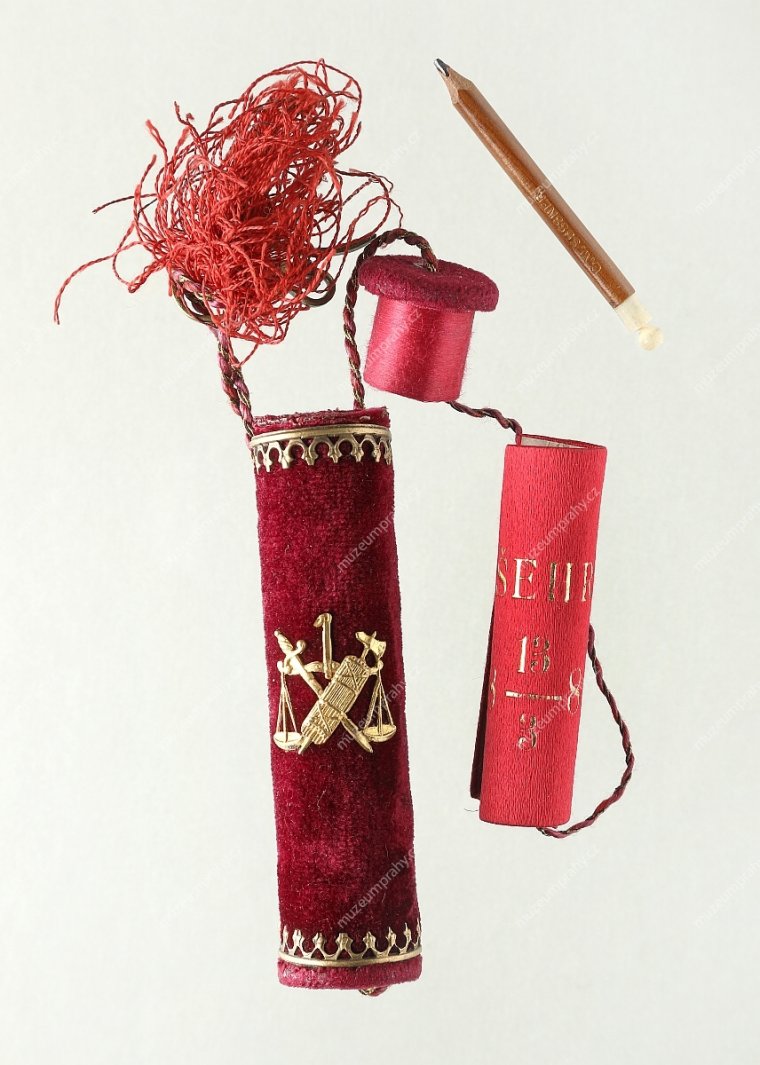 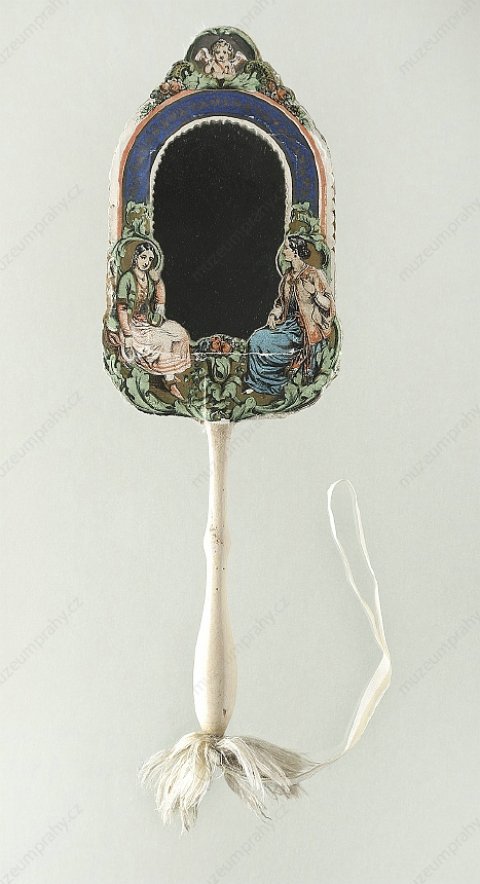 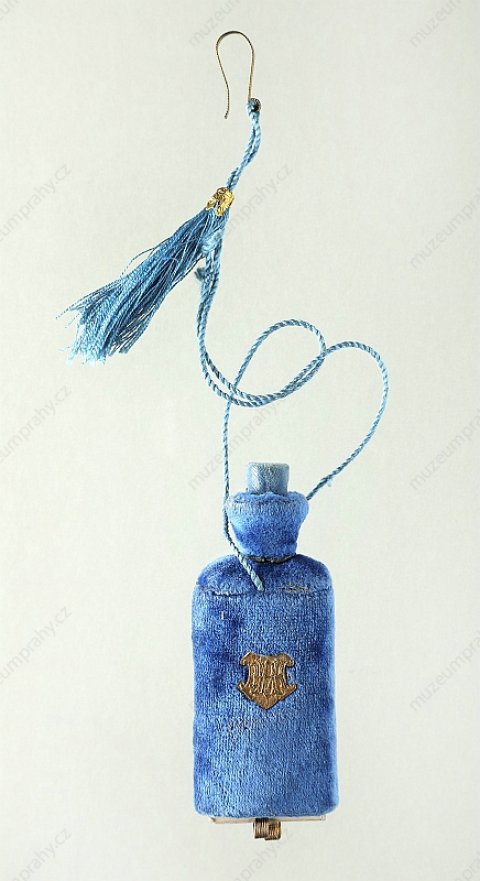 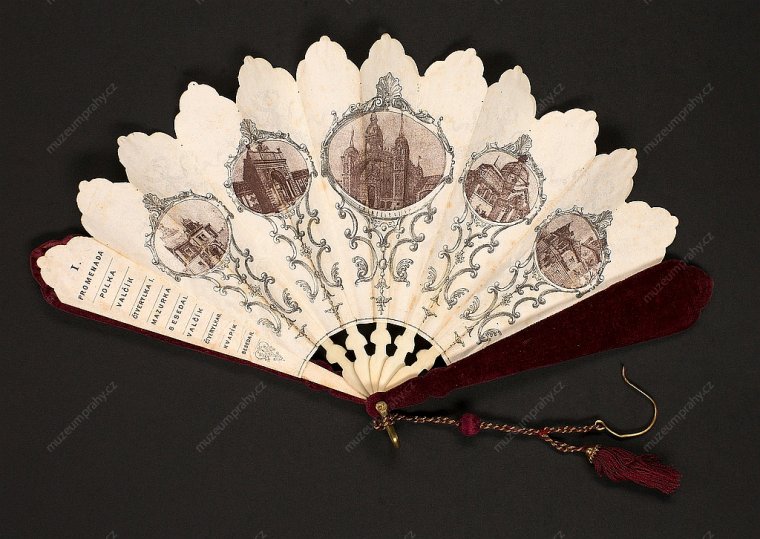 Dance card in the form of afan featuring the views of architecture at the General Land Centennial Exhibition in Prague in 1891, Ball at Žofín, 19 January 1891, Žofín,
paper, pressed velvet, metal, H 008 055. 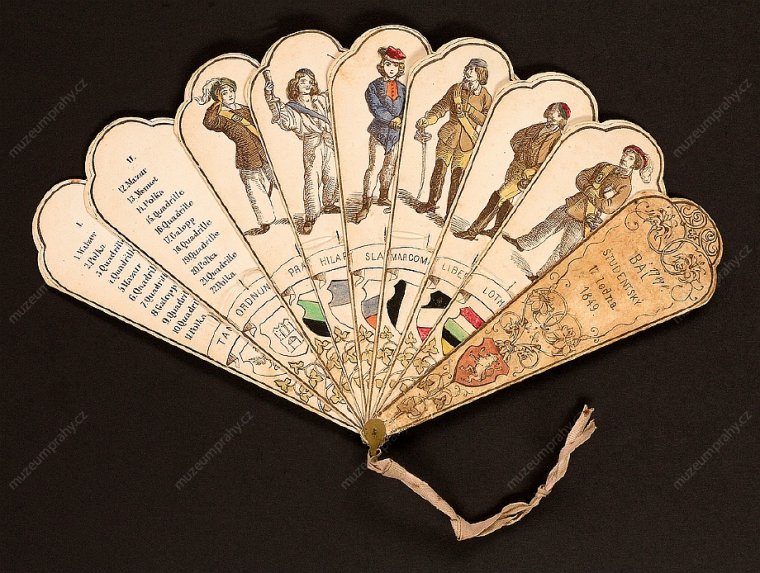 Dance card in the form of afan made of printed and coloured paper with depictions of students, Student Ball, 17 January 1849, Prague,
paper, silk, lithograph, H 019 894. 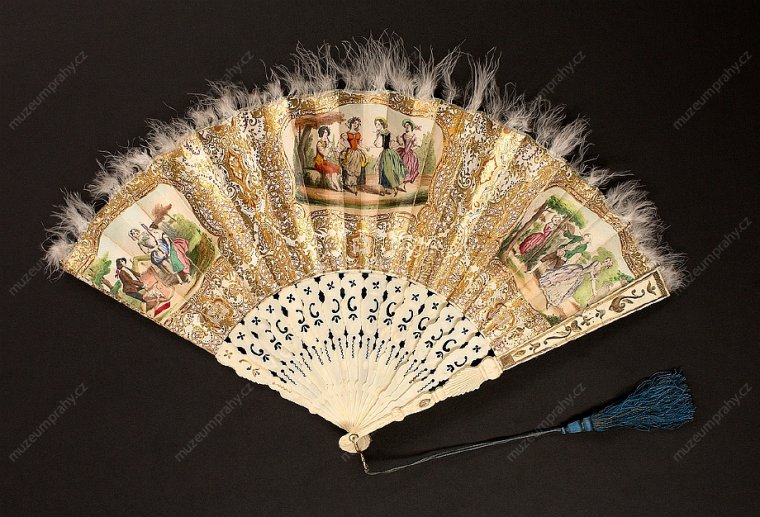 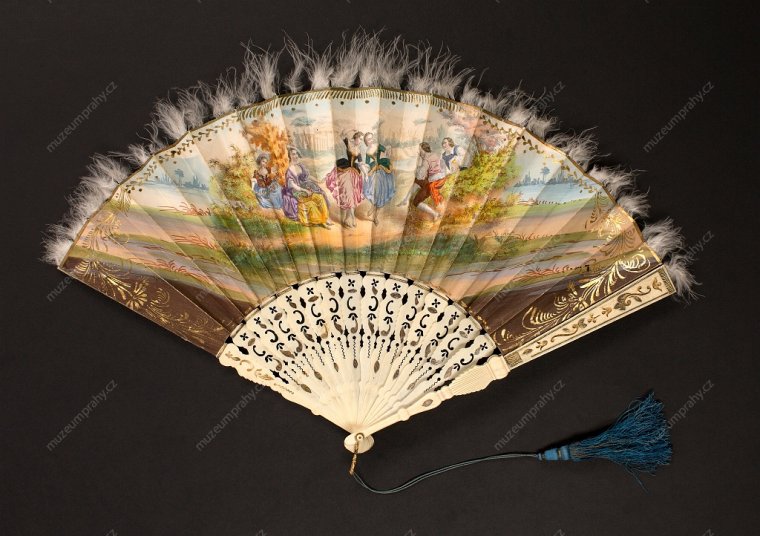 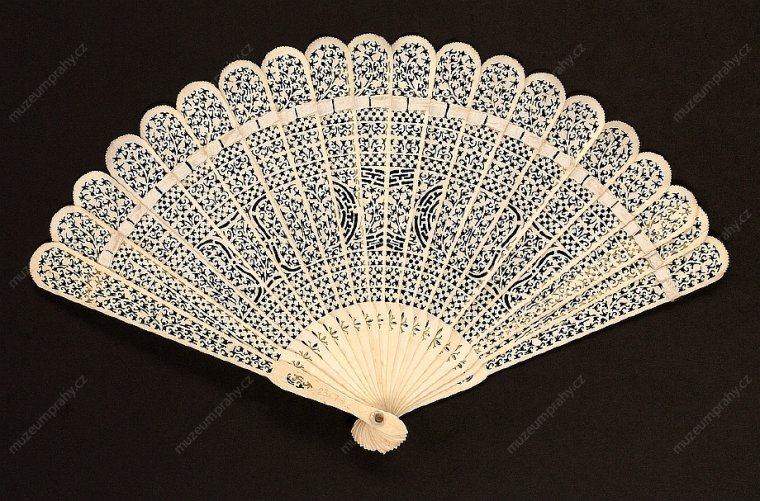 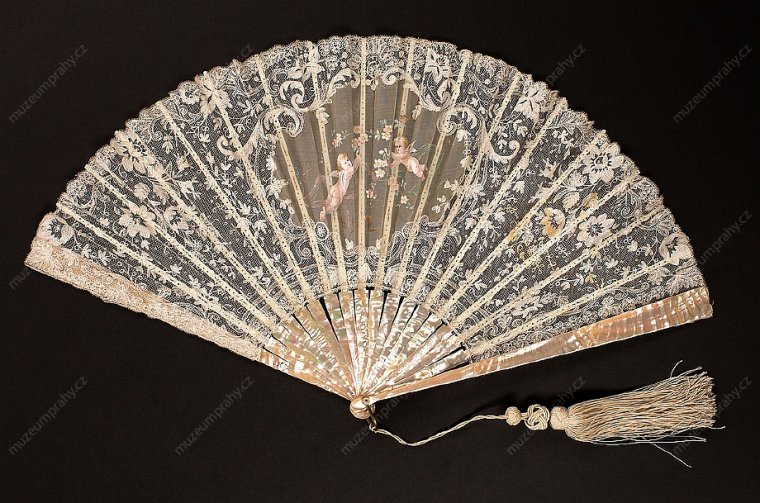 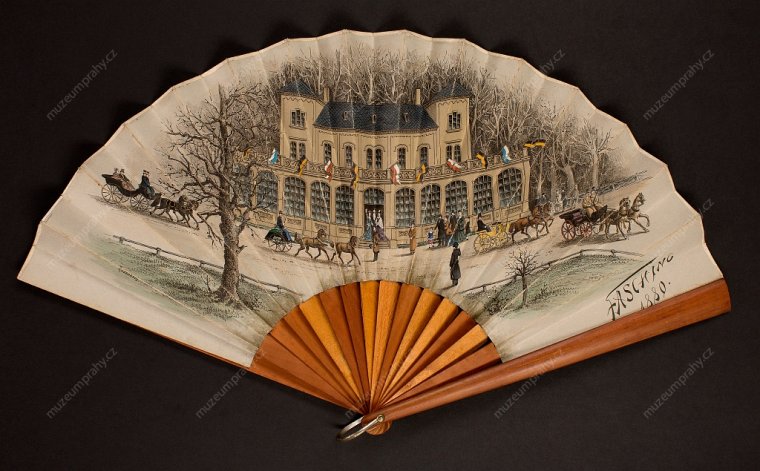 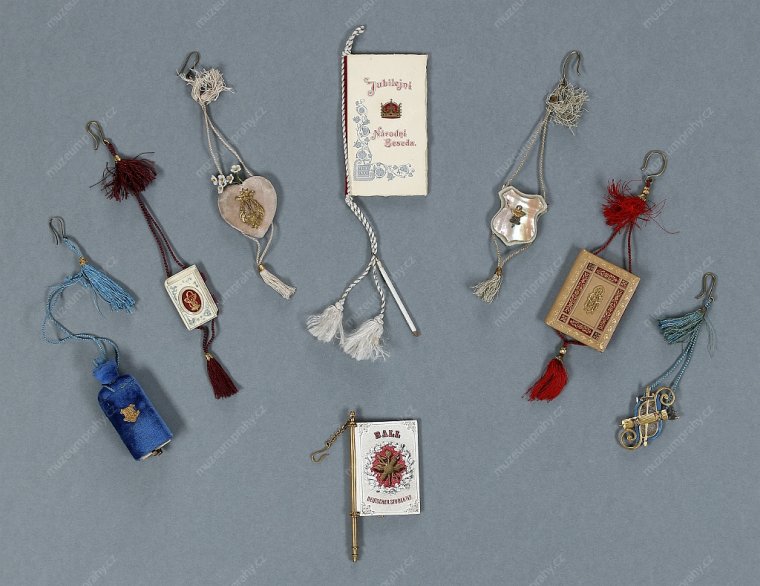