Clam-Gallas Palace in the Old Town of Prague ranks among the most prominent architectural monuments of Prague and the Czech Republic. One of the prime works of Prague Baroque architecture, it is a splendid example of historical housing and the lifestyle of then aristocrats. The palace is situated on a large construction site comprised of a four-wing Baroque building around the central square courtyard. In the axis of Karlova Street, it is connected with the entrance tower-shaped avant-corps, the staircase tower near the north-eastern corner, and the eatern wing near the rear wings of houses that constitute the western front of Malé (Small) Square. The palace area further includes three smaller yards and a corner garden. The external and internal monumental look of the palace dates from the second and third decades of the 18th century and further reconstructions in the late 18th and early 19th centuries.

The history of the structure dates back to the Middle Ages; archaeologists agree that the local housing development originates as far back as the Romanesque and Early Gothic periods. The first written record is from 1351 when the house was rebuilt for John Henry, Margrave of Moravia. It was a structure erected in the southern part of the present-day palace. Over the following centuries, prominent burgher and noble families alternatively owned the palace. In the early 15th century, it was called Otlovský after the Otlín family of goldsmiths; at the beginning of the 16th century, it was named Samuelovský after the owner Jiří (Georg) Samuel of Hrádek. Beginning in 1604, the house came into the possession of the Kinsky family (originally Vchynsky: it was purchased by Radslav the Elder Vchynsky von Wchinitz und Tettau) and received its Renaissance palace style. When Wilhelm Kinsky was assassinated in Cheb in 1634, the emperor gave the confiscated palace to General Matthias, Count Gallas (1588–1647). Although the palace was in poor condition, only the most necessary reconstruction was conducted. At the beginning of the 18th century, Matthias's son Johann Wenzel Gallas (1671–1719) purchased several adjacent houses and plots to erect a three-wing Baroque palace. 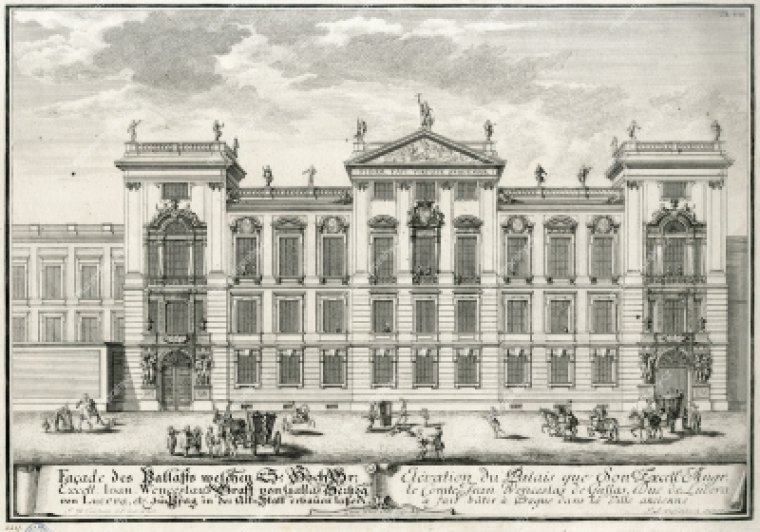 In the late 17th and early 18th centuries, Johann Wenzel ordered that the northern wing along with the left avant-corps be built on the newly acquired plots, but a more thorough reconstruction was initiated soon afterwards. In the winter 1712–1713, Johann Wenzel addressed the Vienna court's architect Johann Bernhard Fischer von Erlach who subsequently made designs according to which the builders, including Tomas Haffenecker, realised the plan. Fischer von Erlach simultaneously designed the relief decoration for the palace and its gorgeous interiors. Matthias Bernhard Braun, or more precisely his studio in collaboration with summoned stucco masters and artisans, supplied the sculptural decoration of the palace exterior and the main staircase. At the time of Johann Wenzel's unexpected death in 1719, the structural work was finished, but the entire palace was fully completed by the heirs of Johann Wenzel. At first, Philip Joseph Gallas (1703–1757) completed the decoration for the central staircase and several representative halls and parlours in the 1720s. The decorator was the famous painter Carlo Innocenz Carlone. During the Prussian siege and occupation of Prague in 1744, the palace was completely plundered.

At the end of the 18th century, Christian Philip Clam-Gallas (1748–1805) finished the interior decoration and furnishings and also refurbished the private theatre. The local palace theatre as well as the ball and concert halls made the palace the cultural and social centre of Prague at the time. Christian Christoph Clam-Gallas (1771–1838) was instrumental in organising the performance of Ludwig van Beethoven in the late 1790s and, according to tradition, perhaps even of Wolfgang Amadeus Mozart and Josepha Duschek. In the years 1812–1828, the famous palace theatre was in operation there.

After the demolition of buildings adjoining the palace on the north – the Church of Our Lady on the Pool with its parish house, school, and cemetery – a plot of the former cemetery was purchased in 1800, and the palace compound was expanded by a corner garden, enclosing wall towards Mariánské Square (František Heger), and a public fountain with the statue of a girl, known as Terezka, by the sculptor Václav Prachner in 1812. Furthermore, a winter garden was established in the palace's northern wing and the first floor interiors were rebuilt in the classicist style. The second floor interiors were sumptuously decorated later – in the Biedermeier and the Second Rococo styles. The rebuilding of the northern wing into a theatre hall remained incomplete.

Starting from the last decade of the 19th century, the palace was rented out almost in its entirety; the family of counts lived in Vienna and kept only a several-room flat in Prague. At the close of 1918, the palace housed, among others, the Czechoslovak Ministry of Finances. In 1945, it was nationalised and the Prague City Archives moved there from the burnt Old Town Hall. It remained in the palace until 2017. During 1978–1994 and 2017–2022, the palace was substantially reconstructed.